Dusty day 3 of Big Red Bash 2019. We were getting pretty stinky by now!

You see a big part of the event was the environmental considerations. First up were the interesting “enviro-toilets” that Noah euphemistically coined the phrase of “putting some sawdust in the hole”.

They were basically drop toilets with wheely-bins under. You did what you had to do and tipped a tin cup of sawdust on top. Apparently the contents were being composted off site. They may sound terible but they were really pretty good! The “Dunny Angel” volunteers staffed them constantly, keeping them in good nick.

All grey water was collected and no showers were provided. This ment baby-wipes all round trying to get off layer on layer of dust.

Enough of that mundane stuff like personal hygiene and cleanliness… we were here for the music!

Today was the best of the best! Midnight Oil had arrived and were due on stage tonight. The excitement in the BRB community was palpable.

The artist bill on day 3 consisted of Neil Murry, Steve Kilby of the Church, Busby Marou and Kasey Chambers. A bit of something for everyone in there. I am also pretty sure Steve Kilby has had a “bit of something” before his performace as he did not seem to be functioning too well 🤔. All the other acts were great.

Busby Marou is a favorite of ours and they did not disappoint. They were filming for an upcoming Queensland Tourism advert. All of the Smiths will surely be featured spruking the cane toad state as “beautiful one day, perfect the next”.

One of their songs Best Part of Me has been earworming Chloe. She has declared they were her favorite band from the whole 3 days. 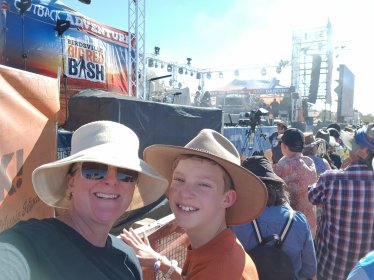 Although Kasey Chambers’ music is not on our “favorites” playlist, we did enjoy her performance and stage presence. Her in-between song banter was genuinely hilarious and gave me a new appreciation of what she has achieved over her long career.

And then there was the almighty Midnight Oil. It was clear a vast majority of the 10 000 strong crowd were here to see Mr Garrett and his mates finish their world tour on home turf.

Their connection with the aussie outback and indigenous culture made this venue on Big Red so so special. They blew away the crowd with a massive long set that inclued two encores and a good selection of their signature hits.

Noah, Chloe, Kaz and I worked our way into the mosh pit up the front and had a blast! What an experience!